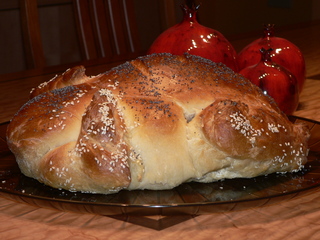 I make this Challah for shabbat, holidays, and just for the heck of it. Best bread ever... And, on Thanksgiving I make it in the shape of a turkey!

Put in large mixer bowl: Mix 4 cups bread flour 2 packs of rapid rise yeast 2 very full teaspoons salt (more or less to your taste) ½ cup honey Mix on low speed until combined. Add (Add slowly to flour while mixing): ¼ cup orange juice ¼ cup veg oil 1½ cups boiling water Mix in two eggs Add about 3 cups of bread flour (one cup at a time), while kneading with dough hook, slowly until ball forms - I leave it a little sticky but rollable. Add raisins at this point if you choose to use them Roll into ball and set in a greased bowl - roll around in the bowl to grease the whole ball - cover with a towel and let rise at least one hour until puffy Knead again Shape I usually braid rolling out four long ropes of dough. (can be wrapped tightly in saran wrap and frozen at this point) If you freeze the dough after rising and braiding, just take out the morning of the day that you want to use the bread and let rise again on greased pan or pan with parchment paper which is what I prefer. It will rise as it defrosts. Takes several hours. Cover with slightly damp towel. If you take out around 8-9am will be ready to bake between 3 and 4. Rise braided dough about one hour Brush outside of braided dough with egg and sprinkle with topping (sesame seeds, poppy seeds, onion flakes, minced garlic, whatever sometimes I use a multi seed mix)Bake about 35 minutes at 350 until top and bottom are golden brown