Gastronomical Treat for the Taste Buds! An Asian Slaw like you have never tasted before!

EQUIPMENT NEEDED Chef’s Knife Paring Knife Cutting Board Salad Bowl or Container, large Measuring Spoons Scale Measuring Cups, Dry Measure Tongs Measuring Cup, Liquid Measure Wire Whisk Metal Mixing Bowl PREPARATION Peanut Dressing: 1.Cut a medium lemon in half and squeeze out juice, about 1 tablespoon, and set aside. 2.In a metal mixing bowl, whisk the rice vinegar, red wine vinegar, soy sauce, hot sauce, lemon juice, and garlic. 3.Add the sugar, salt, and white pepper. Whisk until sugar and salt are dissolved. 4.Pour the sesame oil into bowl in a slow stream and continue to whisk to emulsify. Place a damp paper towel or kitchen towel under bowl to keep it steady while whisking. 5.Add the peanut butter and whisk until smooth. 6.Cover and refrigerate until needed. Confetti Slaw: 1.Wash and dry all vegetables except the scallion and cilantro. 2.Remove outer leaves from both cabbages and discard. Cut away core from both cabbages and discard. 3.On cutting board, use a Chef’s knife to slice ¼” shreds of each cabbage and place shreds into a large bowl. 4.Slice about a quarter inch off the top and bottom of each pepper. Remove seeds by laying pepper on its side and running knife through the inside while rolling pepper. Discard seeds and pulp. 5.Stand pepper up and slice down one side to make pepper one long strip. Cut strip into 4 manageable square pieces. 6.Trim inside of each piece of its excess ribs and pulp by shaving off with a Chef’s knife or paring knife. (Lie on skin side and trim by holding end nearest you and cutting away from you.) You should have to only trim about ⅛ inch to give each piece a neat appearance. 7.Cut each trimmed piece of pepper into julienne slices. Place on top of cabbage in bowl. 8.Wash and dry the fresh cilantro. Medium to fine chop cilantro and set aside. 9.Wash and dry scallions. Cut on a bias into thin slices. Add to cabbage mixture in bowl and toss using tongs. 10.Pour dressing over slaw. Use tongs to toss and in mix well. 11.Sprinkle chopped cilantro on top of salad and toss to mix in. 12.Taste and adjust seasoning with Kosher salt and white pepper, if needed. 13.Sprinkle sesame seeds evenly on top of slaw as garnish. To Plate: Mound about ¾ cup of slaw onto salad plates. Sprinkle sesame seeds sparsely. 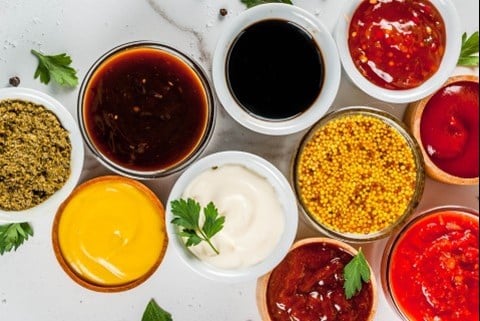 Sauces and Dressings
Carrot and Apple Slaw With Dates