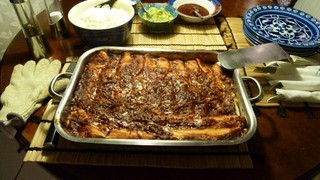 Best Enchiladas ever. So says everyone who ever eats them.

Pulled Pork: Peel onions and cut into quarters. Peel and smash garlic cloves. Remove the stems and most of the seeds from THREE of the dried New Mexico chilis (you'll use the other 20 later), and the stems from the ancho and chipotle peppers. Liberally season the pork butt on all sides w/the Adobo seasoning and cracked pepper. Place pork into a large (coverable ovenproof) roasting pan, fat side up. Surround pork butt w/onions, garlic, peppers, add chicken stock and beef bullion crystals. Cover and bake at 375 degrees for an hour. Reduce heat to 275 and slow roast for another three to five hours, until the pork is falling off the bone. Check periodically, and add water as the level goes down. (You want to end up with yummy juice). Remove the pork butt, let cool until you can handle it without burning yourself, and “pull” the pork with two forks, discard any remaining fat and bone. Put the cooking liquid, including veggies, in the freezer (use a large pitcher if you have room)…when the pork fat solidifies, scrape it off the top, and discard (or save for tamales). Put the cooking juices in the Cuisinart, including all cooked veggies, and process. I then put this liquid in a large plastic coke bottle…and use it for lots of stuff. You’ll only need two thirds of the pulled pork for the enchiladas, so freeze the rest for another day. Red Sauce: Remove the stems and most of the seeds from the remaining New Mexico Red chilis. Real NM Reds (sometimes called Hatch) are the key to this recipe. They are the real deal, and give the whole recipe its authentic flavor. Put seeded chilis in a large saucepan, add 3 - 4 cups of water, bring to a boil, return to a simmer for about 5 minutes, until soft. Process in 2 batches in the cuisinart, using the chili water. Red enchilada sauce should be the consistency of a nice gravy, not thick, not thin. Grate the cheese in the Cuisinart. Preheat the oven to 325. Then prepare the enchilada meat. In a large pan, melt 3 – 4 tablespoon. butter, add an equivalent amount of flour and make a roux. Thin this sauce with the reserved and de-fatted pork juice. Whisk until creamy and the consistency of a nice thick turkey gravy. Add 1 tablespoon. ground cumin, stir. Add about the pulled pork, and ¾ cup of the enchilada sauce. Stir. Add more pork juice if necessary, all of the meat should be moistened with “sauce”, but not soupy. Use a large lasagna pan to assemble the enchiladas. Spread about ½ cup of the enchilada sauce on the bottom of the pan. On a large plate, place a tortilla. Place about ½ cup of the pork mixture, about 2″ thick, down the left/center of the tortilla to within about ½ inch on either end. Be sure there is a bit of juice. Add a sprinkling of grated cheddar to cover the meat. Roll into an enchilada and place into the lasagna pan. Repeat until the pan is full (usually about 10 – 11 in length and 1½ across). Continue in a second, smaller pan if necessary until all of the meat mixture is used up. Pour the enchilada sauce over the enchiladas (keep a little in reserve to serve as sauce on the table), and sprinkle with the remaining grated cheese. Bake at 325 for about 25 minutes. Serve with sour cream and guacamole. 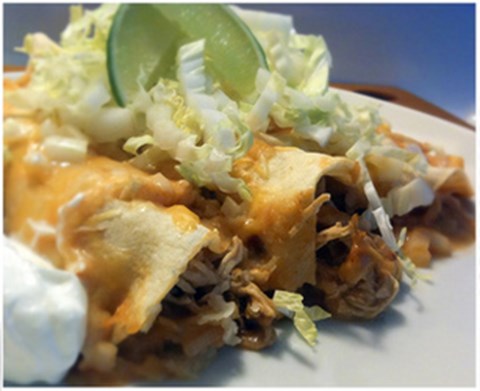