In an effort to “clean up” some of the sweets we have around the house, I came up with this version of a carrot cake, which I feel entirely guilt-free about. It is full of fresh, nutritiously dense local ingredients with a brownie-like density and loaded with flavor, texture and a feeling of cheating. It contains no gluten and no processed sugar, and is just as good as a breakfast bread as it is as a dessert.

To make the cake: In a Cuisinart food processor with a shredding blade, or with a hand grater, shred the whole carrots and half of the apple. Place in a bowl with ¼ cup of the maple syrup, mix well and let it “marinate” while you’re continuing preparation. Preheat oven to 325 and grease an 8x8 baking pan. Line the bottom of the pan with parchment paper for easier removal. Chop the remaining half of apple. In a small saucepan, combine the chopped apple, 2 tablespoons of the dried cherries and ¼ cup of the cider. Simmer and cook down until the apple is very tender, about 10 minutes. Add the grated ginger and cook a few minutes more. Remove the mixture from the saucepan and blend in a small food processor to create a thick paste. In a bowl, sift together the cinnamon, baking soda, salt, ¼ teaspoon of the ground ginger, nutmeg and coconut flour. In a separate bowl, blend together the eggs, 1½ teaspoons of the vanilla, the melted coconut oil and the apple cherry paste until well blended-about 4 minutes. Add the dry ingredients and blend together gently with a wooden spoon until evenly moist. In a colander set over a bowl, drain the shredded carrot and apple mixture, reserving the maple syrup that drains off. You will need it for the icing. Squeeze as much liquid out of the carrots and apples as you can and add to the rest of the batter along with ¼ cup of the walnuts and blend until just incorporated. Pour the mixture into the prepared pan and spread evenly. Bake for 30-35 minutes until an inserted toothpick comes out clean. Cool on a rack for about 10 minutes, then carefully transfer to a plate while removing the parchment from the bottom. While the cake is cooling, make the “icing”: In a bowl, mix together the cream cheese, the remaining 3 teaspoons of grated ginger, the remaining ¼ teaspoon of ground ginger, the remaining teaspoon of vanilla and the reserved maple syrup that was drained off of the carrots and apples. Fold in the 2 tablespoons of fresh carrot. Spread evenly on the cake, and garnish with the rest of the walnuts plus the toasted coconut and chopped dried cherries if you like. 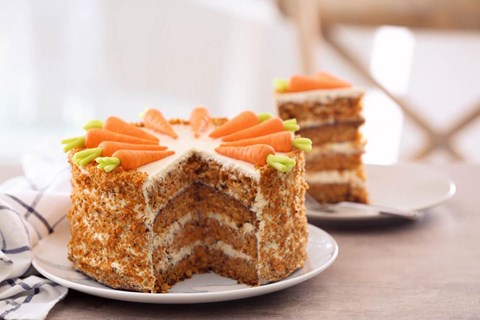 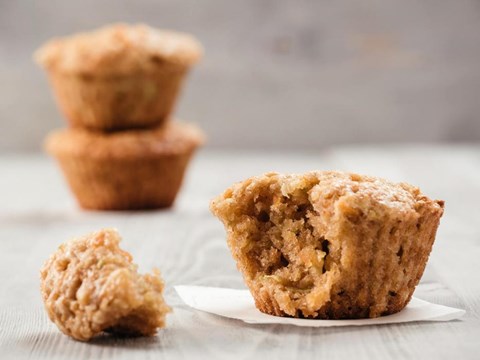